Ganesh Chaturthi, also called Vinayaka Chavithi, is an auspicious Hindu festival which is celebrated for 10 days every year. The festival is celebrated in the Bhadra month as per the Hindu calendar which generally falls in mid-August to September. It marks the birthday of the beloved elephant-headed Lord Ganesha.

Ganesha is known as the God of wealth, sciences, knowledge, wisdom and prosperity, and that’s why most Hindus remember him and seek his blessings before starting any important work. Lord Ganesh is known by 108 different names like Gajanana, Vinayaka, Vighnaharta among others.
This festival is celebrated with great devotion and joy by Hindus throughout the world. In India, it is majorly celebrated in states including Maharashtra, Gujarat, Goa, Madhya Pradesh, Karnataka, and Telangana.

Ganesha is the younger son of Lord Shiva and Parvati. There are various stories behind his birth but two of them are the most common ones.

According to the first story, Lord Ganesha was created by Parvati out of dirt from her body to guard her in the absence of Shiva. She gave him the task of guarding her bathroom door while she took a bath. In the meantime, Shiva returned home and Ganesha, who didn’t know who Shiva was, stopped him. This angered Shiva and he severed Ganesha’s head after a tiff between the two. Parvati was enraged when she came to know about this; Lord Shiva, in turn, promised to get Ganesha back to life. The devas were sent to search for a child’s head facing north but they could only find an elephant’s head. Shiva fixed the elephant’s head on the child’s body, and that how Ganesha was born.
The other popular story is that the Devas requested Shiva and Parvati to create Ganesha so that he can be a Vighnakarta (creator of obstacles) for rakshasas (demons), thus being a Vighnaharta (averter of obstacles) and helping Devas.

Historically, the festival has been celebrated since the time of King Shivaji. It was during India’s freedom struggle that Lokmanya Tilak changed Ganesh Chaturthi from a private celebration to a grand public festival where people from all castes of the society can come together, pray and be united.

Over the years with growing environmental awareness, people have started celebrating Ganesh Chaturthi in an environmentally friendly way. This includes– getting Ganesha idols made of natural clay/ mitti and using only flowers and natural items for decorating the pandals.

There are four main rituals which are performed during the 10-day long festival. They are namely– Pranapratishhtha, Shhodashopachara, Uttarpuja, and Ganpati Visarjan.
The excitement of Ganesh Chaturthi settles in weeks before the festival actually begins. Artisans start preparing clay idols of Ganesha in different poses and sizes.
The Ganesha idols are installed in beautifully decorated ‘pandal’ at homes, temples or localities. The statue is also decorated with flowers, garlands and lights. A ritual called Pranapratishhtha is observed where a priest chants mantra to invoke life in the diety.
Prayers are then offered to Ganesha’s idol in 16 different ways. This ritual is called Shhodashopachara.
People celebrate by singing or playing religious songs, dancing to drum beats and by lighting up fireworks– all of which add to the festive mood.
The Uttarpuja ritual is then performed which is about bidding farewell to Ganesha with deep respect. This is followed by Ganpati Visarjan, a ceremony wherein the statue is now immersed in water. While carrying the statue to the sea and while immersing it, people generally chant in the Marathi language ‘Ganapati Bappa Morya, Purchya Varshi Laukariya’ which means ‘Goodbye Lord, please come back next year’.
While some devotees celebrate this festival at home, others pay their visit to Lord Ganesha at public pandals. People offer their due respect, prayers and offerings to Ganesha. Dishes like Lord Ganesha’s favourite Modak, Pooran Poli, and Karanji are prepared for friends, family and visitors. 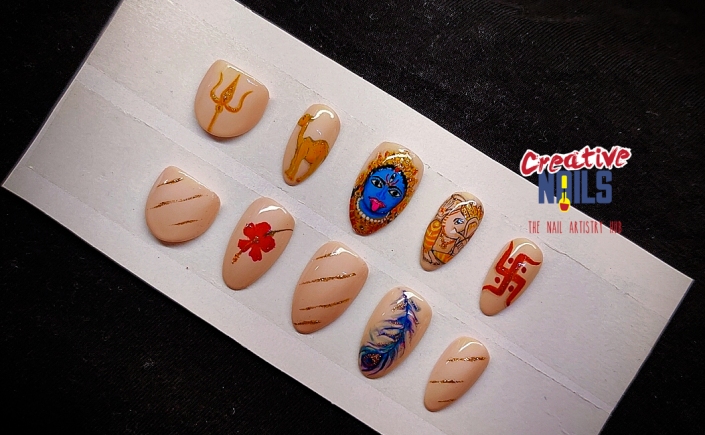 Creative Nails is designing customised Press-On Nails too! Recently one of our Gujrati client asked to design an artificial nail set with Dasha Mata/Momai Maa and Lord Ganesha for the 10 day celebration of Dasha Mata Puja festival. Till then I never knew about Dasha Mata. This Vrat is usually done by Gujrati’s in India.

How is Dasha Mata vrat observed?

Women put ten knots to a cotton thread. Then they walk around the Peepal Tree ten times while twirling the sacred cotton thread on its trunk. They also read the Katha of King Nala and his Queen, Damayanti.

By observing a fast on this day, married women pray for the wellbeing of their family. And by doing so, they seek the blessings of the Gods and Goddesses for improving the planetary positions in their natal charts. The fast, once observed, must be continued for a lifetime. Sketches of the house are made on either side of the main door with Haldi and Kumkum. Thus, women pray to the Gods and the Goddesses for guarding their home against evil and negativities.

On this day, a vrati may consume only one kind of grain. Most women opt for wheat, but consumption of salt is prohibited. Moreover, people do not lend money or buy new objects on this day. Thus, by following these protocols, a vrati worships for the well-being of her family.

Here is the full set of Press-On Nails customised for our client. ☺️

Creative Nails is active on: